Any new skill can be confusing when getting started, especially something like photography. Photography is full of photography terms and lingo and can be overwhelming for any beginner.

How do you know all of the most important photography terms?

Do you want to know all of the basic photography terms that every beginner should know?

– a function on a camera that allows a user to choose the aperture size to suit their needs, while the camera decides the other settings to get a correct exposure.
/Learn more: Aperture Priority in Photography/

– stands for Advanced Photo System type-C and is an image sensor format found in many cameras today. It is equivalent in size to the Advanced Photo System film negative in its “Classic” format, of 25.1×16.7 mm, an aspect ratio of 3:2. It is approximately 1.5 smaller compared to full frame 35mm sensors.

– it refers to the ratio of height to width of a given image. Most DSLR cameras will shoot at a 3×2 aspect ratio, but can also be cropped to other aspect ratios as well.
/Learn more: Aspect Ratio in Photography/

– much like the name suggests this is the type of photography that has to do with the objects of universe and wast areas of the sky. It is most often done at night.
/Learn more: Beginner’s Guide to Astrophotography/

– a function of a camera that allows it to adjust the focus of the lens to a specific position in view, making sure that the subject of your photograph is sharp. Some cameras have a dedicated button for this while others require a push of the shutter release button.

– a setting available on most cameras that allows you to autofocus with a button on the back of the camera. It enables decoupling the autofocus functionality from the shutter release button.
/Learn more: Back Button Focus Explained/

– is the quality and aesthetics of an intentionally out of focus section of an image. It is often used in portrait photography, to emphasize the subject. Bokeh is a product of lens design and construction.

– is a popular technique in photography of taking multiple photos of the same object using different camera settings. Exposure bracketing is the most common type of bracketing.
/Learn more: Auto Exposure Bracketing (AEB)/

– This is when a camera is held unstabilized when the shutter is open. It often results in a blurred image, especially when using slower shutter speeds.
/Learn more: Why Are My Pictures Blurry/

– is discoloration or fringing that happens in areas of a photo with high contrast. This is an optical phenomenon caused by your lenses.
/Learn more: What Is Chromatic Aberration?/

– the term describes how objects within a photograph are set up or arranged. It is basically how the subject(s) of a photograph is presented.
/Learn more: What is Composition in Photography?/

– the term indicates the size difference of any given camera sensor to a 35mm film frame. Most entry-level cameras have a 1.5 crop factor. The crop factor also affects the field of view of the lens attached to the camera.
/Learn more: Full Frame vs APS-C Cameras/

– this is the amount of an image that is in focus. Shallow depts of field will only have small sections in focus, while large depths have the majority in focus.
/Learn more: Depth of Field in Photography/

– refers to an open-source file format created by Adobe for a purpose of long-term storage of digital photographs generated in multiple proprietary formats.

– the number of tones from lightest light to darkest dark which camera can reproduce in a single photograph.
/Learn more: Natural Looking HDR/

– OVF is the part of the DSLR camera and stands for Optical Viewfinder. When you look through OVF, you are looking through the lens. You see what lens sees.
EVF stands for Electronic Viewfinder and can be found in most mirrorless cameras. EVF reads the information from the camera sensor. You see the accurate representation of the final photograph.
/Learn more: Optical vs Electronic Viewfinder Battle/

– a total amount of light that is recorded by a camera sensor, and is controlled by the aperture, shutter speed, and ISO.
/Learn more: Exposure in Photography/

– is a functionality of the camera to override default exposure settings set by the camera’s internal metering system. It is used in semi-automatic modes (aperture priority, shutter speed priority) to adjust the overall brightness of an image and is measured in stops.

– the term used to describe the relationship between aperture, shutter speed, and ISO in achieving a properly exposed image. Each setting plays an important role.
/Learn more: Exposure Triangle /

– it stands for Exchangeable Image File Format and sometimes referred to as metadata. EXIF is a collection of information embedded into a digital image by a camera at the moment you take a photo. The most common data are items such as date, time, location, camera model, lens type, ISO, focal length, shutter speed, etc.
/Learn more: What is EXIF Data?/

– a lens with a large aperture like f/1.8, f/1.4 and larger. Lenses with the large aperture allow the camera to record light faster without the need for slow shutter speeds.
/Learn more: Types of Camera Lenses/

– If aperture the opening in a camera lens that controls the amount of light passing through the lens, then F-Stop is the aperture setting or number that corresponds to a certain aperture; f/1.8, f2, f/2.8
/Learn more: F-Stop In Photography/

– often used as a slang term, glass refers to the lens that you are attaching to your camera. Whether the lens is big or small in size or high or low quality, it is referred to as glass.
/Learn more: Types of Camera Lenses Used in Photography/

– a term in photography that refers to the first hour after sunrise, and the last hour before sunset when the lighting outside is the most favorable for landscape photography.
/Learn more: Light in Photography/

– is a compositional rule or principle of arranging the elements of the scene in such a way that the end result is aesthetically pleasing to the viewer. Even though the origin of this principle is mathematical, it was widely used in ancient architecture and art.
/Learn more: Golden Ratio in Photography/

– the term comes from the film photography era. Grain is the random distribution of light sensitivity specks in a given image cased by the coarse nature of silver halide crystals of light-sensitive layers of film. Film with higher ISO sensitivity has larger silver halide crystals and as a result, produces more noticeable grain. Grain is more prominent in the brightest areas of the photo.
/Learn more: Why Are My Photos Grainy/

– an acronym for High Dynamic Range. This is a technique used by bracketing and taking a series of shots at different exposures and then blending them together, creating an image with a much wider dynamic range than a single shot could capture.
/Learn more: HDR Photography Fundamentals/

– A chart or a visual representation of pixel distribution in any given image based on its brightness. It is the most valuable tool for controlling how much light is recorded by a camera sensor (exposure).
/Learn more: Perfect Exposure With Every Shot/

– it is the distance at which you focus which results in the largest depth of field possible.
/Learn more: Hyperfocal Distance In-Depth/

– the term originated in film photography and reflected the film’s sensitivity to light. The concept of ISO transitioned to digital photography but there is not such a thing as sensor sensitivity, it was implemented in the form of applied gain. The gain is applied to a captured image to make it brighter.
/Learn more: ISO in Photography/

– a dedicated lens designed to take photos at a very short focusing distance. It is used to photograph small subjects such as insects, flowers, plants, jewelry…
/Learn: What Is a Macro Lens?/

– ND stands for neutral density and is a filter that you can attach to the front of a lens to block out light. ND filters are popular in long exposure photography.
/Learn more: Ultimate Guide to Neutral Density Filters/

– A slang term that refers to a 50mm prime lens. These lenses are generally small, light, and have great quality.
Learn more: / What Is a Nifty Fifty Lens? /

– noise is a visual distortion in the form of random speckles. It is the digital equivalent of film grain. Hight ISO settings, long exposure, and even high temperature increase the amount of noise in digital images. Image noise is much more prominent in dark areas (shadows) of the photo.
/Learn more: Why Are My Photos Grainy/

– a lens with a fixed focal length, so it is unable to zoom in or out. A prime lens allows you to take photos with a single angle of view. As a rule, prime lenses are more compact, cheaper, produce better quality images, and have larger apertures (see fast lens).
/Learn more: Prime Lens vs Zoom Lens/

– file format that most digital cameras capture images in. It is a collection of data recorded from each pixel of the sensor. It requires RAW editor such as Lightroom to convert the raw data to viewable images.
/Learn more: RAW vs JPEG – The Only Guide You Will Ever Need/

– a mechanical or electronic device that lets you take photos without pressing the shutter button.
/Learn more: What is a Remote Shutter Release? Do I Need One?

– is a classical guideline designed to help artists to create more balanced and impactful compositions. It states, that by dividing the frame into 9 equal quadrants by using 2 vertical and 2 horizontal lines you should place essential elements of the composition along those lines or their intersections.
/Learn more: Rule of Thirds in Photography/

– This is the amount of time that a camera’s sensor takes to collect light for an image. A longer shutter speed results in a brighter image, and a shorter one requires more light.
/Learn more: Shutter Speed Chart/

– it refers to the technique of narrowing the aperture by increasing f-stop number, from f/5.6 to f/8 for example. The technique most often used for the purpose of increasing depth of field to get more elements of composition in focus.
/Learn more: How to Know What Aperture to Use/

– is the difference in brightness between the center and the edges of the image. It is most often used to emphasize important parts of the composition.
/Learn more: Creative Vignetting/

– any lens with the field of view wider than the human eye is considered wide-angle. The angle of view of the human eye is approximate 45-50mm.
/Learn more: Wide Angle Lens: The Ultimate Guide/

– the opposite of prime lens, a zoom lens has a flexible focal length. The focal length and field of view can be changed by turning a ring on the lens.
/Learn more: Zoom vs Prime Lens/

Photography can be a great endeavor to get started in, but sometimes it can be a little challenging due to all of the different terms, jargon, and abbreviations. I hope you found this list of terms helpful, and now you feel better prepared to take on the world of photography! 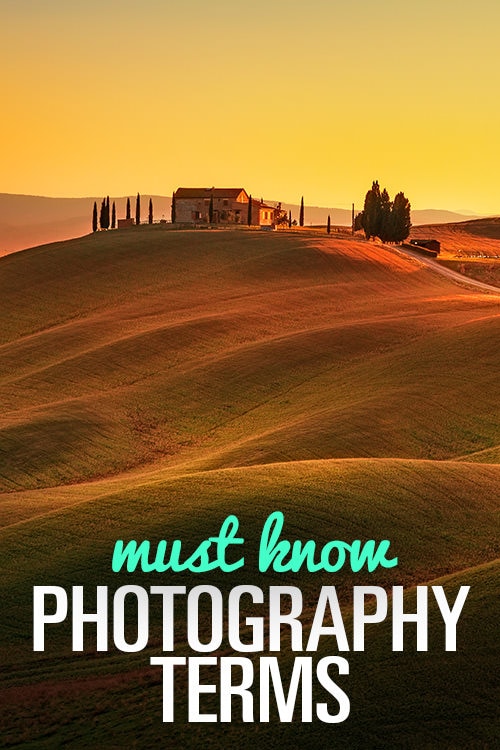